Tag Archives: dance of the dead

I asked Marina if she had a new zombie report for her readers. She threw a shoe at my head and made a growling noise that made the hair lift on the back of my neck. 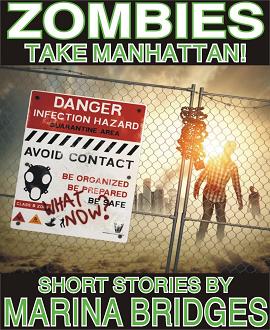 You see, she’s writing a new zombie story. We’re really hoping to have it finished before Christmas (she writes, I edit and produce). Apparently, my asking if she’s done yet (or asking her to write more posts for this blog) has the same effect as my kids screaming from the backseat of the car: “Are we there yet?!?” (It’s her own fault. I love Zombies Take Manhattan and I’m a greedy reader and, much like zombies, some is never enough.)

She did say if I was really, really good and quit bugging the snot out of her, she’ll let me read her work in progress on Monday. Well, shoot. That means I have to be good all weekend. That’s iffy.

It also means I can’t talk about the new story. I can say it has zombies in it. And, best of all, it features one of my favorite characters. Anything else, my lips are zipped.

That’s not much of a zombie report.

Zombie news, zombie news… I’ve already beaten my disappointment in The Walking Dead to death (I suggested to Marina that she include a scene where Rick and Carl show up in NYC and get eaten–oddly enough she didn’t think that was a grand idea…writers, hmmph). I did find a Jeff McComsey GUTTERS comic strip called “8 Easy Steps To Create a Walking Dead Storyline” that was pretty good. I read Jonathan Maberry’s Dead of Night, which was horrendously creepy and disturbing and gave me nightmares–meaning I loved it. I also watched (again) one of my favorite zombie movies

DANCE OF THE DEAD!

Maybe not the classic that Night of the Living Dead is, but it cracks me up every single time.

So zombie report fans, you have my sympathy. You, like me, will have to wait until Marina comes up for air. It’ll be worth the wait.

Whistling, twiddling my thumbs, being good…